New year, new vibe! As we ring in 2021, we’re embracing a sunnier state of mind. Rev up your routine with mood-boosting accessories and everyday essentials that will refresh your space, your style, and your spirit. We see good things in store for you this year—so why not get into the swing of things starting on day one?

It’s time to discover this superb vegan recipe based on Tofu.
It’s a great way to enjoy vegan!

Vitamins, zinc or turmeric can boost the immune system. The world population has become aware of this and is relying on these substances to cope with Covid-19.

Vitamin, an ally against coronavirus

Google Trends has produced a report that shows that the world’s population has adapted its food choices in response to the pandemic. They have understood that consuming vitamins to strengthen the immune system makes it easier to fight the virus. Data collected between June 1, 2019 and April 27, 2020 show a clear link between increased vitamin consumption and the spread of the virus. Consumers around the world are choosing their nutrient-enriched ingredients and have adapted their diets to cope with the virus.

There is a strong increase in the intake of vitamins E, C, D, A and B but also zinc, coffee, ginger, selenium, garlic and turmeric. These intakes differ in different parts of the world. In Europe, the population has chosen to cope with illness by including foods rich in vitamin D. Conversely, Asians (Filipinos, Malaysians, Indonesians) as well as Middle Easterners and Africans prefer vitamin C. South Americans and the Caribbean population have chosen zinc and also eat garlic and turmeric like Africans.

Bohemian style is more than just a fashion trend, it is a true culture in its own right, a culture with a very specific ideology and a complex history.

Although closely associated with the hippie fashion of the 60s and 70s, today bohemian fashion is part of the dominant culture. But in fact, bohemian fashion started as a counter-culture in the 19th century.

Today, the wide variety of Boho clothing and accessories makes it a real phenomenon, a style that follows the lines of effortless and relaxed fashion, with its loose clothing, casual accessories and its mix of artistic and creative elements.

What about the kimono?

Well the kimono takes again enormously of the dress code of the bohemian culture. Ample, with the colored and often floral pattern, and with the natural fabric of quality (mainly silk).

The kimono, although of Japanese origin, is a piece that can be used for an original bohemian style. The kimono also gives an effect of exoticism and open-mindedness to the world, totally in adequacy with the bohemian culture.

The kimono is more and more used by bohemians because the style given by the kimono is very close to the bohemian style. If you decide to try the kimono, we advise you to combine it with a beautiful flower wreath and costume jewelry to get a hippie chic look.

Taking care of one’s body means doing gymnastics that keeps the body and mind healthy at any age and nothing better than our Asian friends to teach us that:

The Qi Gong (“Mastery of energy”) is the Chinese health gymnastics of the Chinese tradition. It resembles Tai Chi Chuan, which is a martial art.

The results, proven by numerous scientific experiments around the world on stress, show relaxing and serene effects and an improvement of the physiological parameters of relaxation and immunity. Above all, Qi Gong is preventive, used as an art of living to remain Zen and to be even more so every day.

Qi Gong is also used to improve health in cardiovascular problems and hypertension, chronic degenerative or infectious diseases, has a traditional reputation for slowing down aging and has proven itself in preventing falls among the elderly. It helps children to be calmer and promotes attention, thus improving learning. It is indicated to athletes to increase their performance and decrease their recovery time after exercise. It prepares women for childbirth. Qi Gong is generally recommended to all those who wish to manage their stress and live more relaxed.

Taking care of your body requires gymnastics that preserves the health of body and mind at any age and nothing better than our Asian friends to teach us this:

Continuing a point of view adopted for the work discussed on Ode Music, Will Oldham attempts here a new instrumental exercise through a documentary on Rotterdam sailors.

Tonkatsu is a Japanese dish made of breaded and fried pork. Ton means “pork”, and katsu is the abbreviation of the English cutlet, coming from the French côtelette. It is accompanied by Worcestershire sauce, as well as minced cabbage and karashi. It is often served with rice and miso soup.

The recipe step by step 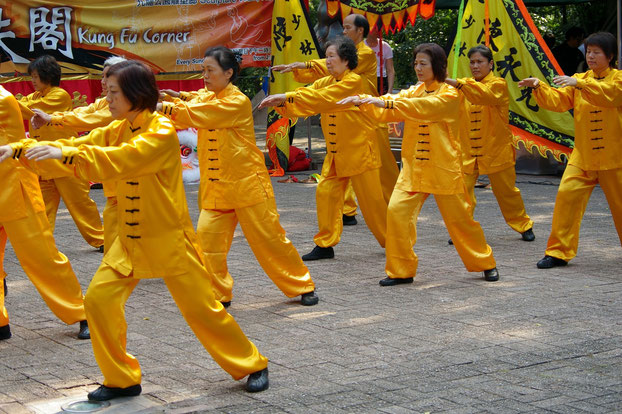 B.K.S. Iyengar developed his approach to yoga based on the yoga tradition handed down to him by his teacher, Shri T. Krishnamacharya, a classically trained Hindu scholar and yoga master. Mr. Iyengar’s system of yoga is unsurpassed in grace, subtlety, and precision. Iyengar-style yoga emphasizes alignment and develops flexibility, strength, balance and endurance. It emphasizes the importance of regulated breathing; the use of blocks, chairs, and other props; and the therapeutic value of adapting the poses to the needs and limitations of the individual students. Mr. Iyengar has authored a number of classic texts on hatha yoga including Light on Yoga. Mr. Iyengar died in 2014 at the age of 95. His daughter, Geeta, and son, Prashant and other teachers continue his work at the Ramamani Iyengar Memorial Institute in Pune, India.

Their approach to Yoga :

CYC is owned and directed by Ann Merlo, Elise Miller and Lisa Brill Robinson. In line with our mission to support a lifetime of yoga practice for our students, we offer asana classes for beginners, continuing, intermediate, and advanced students. We are focused on and known for our therapeutic approach. This approach is important in our regular classes and particularly featured in our yoga for back care, pranayama, and restorative classes, and workshops.

Another important element of the CYC mission has always been presenting yoga workshops and series taught by our own gifted instructors, and by knowledgeable and well-respected yoga instructors from around the world. Topics vary widely and meet the needs of our local and regional yoga population. Answer life’s deeper questions and go beyond the mainstream narrative with Gaia— a member-supported media network of truth seekers and believers empowering an evolution of consciousness. Explore over 8,000 ad-free, streaming titles that challenge modern paradigms and allow you to manifest the reality that defines your being.

Get access to Gaia’s exclusive library of award-winning videos — From Yoga to UFOs, we are “The NETFLIX of Conscious Media!” Enjoy unlimited streaming access instantly to your computer, mobile device, or smart TV.

Get instant access to videos from top nutritionists and personal growth teachers, as well as streaming movies, documentaries and TV series — carefully curated to inspire and engage.

Make the New Year a time of empowerment and inspiration!

TAMGA Designs is a sustainable lifestyle movement, born out of the need for a positive example in fashion. We believe in a bright future for style, people and the planet, so we create clothing that respects all three. The New Bohemians Handbook guides readers in beautifully simple techniques for adding good vibes and style to living spaces. Packed with hundreds of ideas for bringing positive energy to your home, the book features exercises and activities for thinking about rooms in new ways.

“It’s as vibrant, rule-breaking and out the box as she showed in her first book, “The New Bohemians,” which explored bohemian style across the globe and became a New York Times best-seller. Now, Blakeney has written “The New Bohemians Handbook: Come Home to Good Vibes” (Abrams, $27.50). Blakeney offers tips on how to make bohemian style your own, from rearranging what you have to painting. It’s part book, part yoga lesson as Blakeney walks readers through finding clarity, flow, growth and harmony in our homes. In the end, it’s about creating a space that reflects you, she writes. “